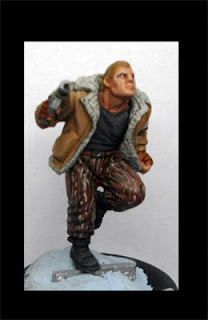 This is the not Batou figure by Hasslefree Miniatures. For those not in the know Batou is one of the main characters in the Japanese Animation Ghost in the Shell which is one of my favourite films.

I had a bit of a cock up when I was preparing this figure for painting, the gun holding hand is not the one which came with the miniatures as the I some how dropped and then lost the gun holding hand whilst preparing it for undercoating. I spent some time looking for it and never found it. The hand I have used is from a Forgeworld figure (I think, I found it in my bits box) and works reasonably well as a replacement. I had to paint the gun hand to match the figures original hand and as you can't actually see both hands at the same time due to the pose it looks okay. Not ideal but I really wanted to paint some camouflage trousers damn it!

I decided to paint the trousers using the Vertical Tiger Strip pattern, which I believe only saw limited service with SOG operators during the 60's and possibly ARVN Rangers. Either way I think its a cool pattern, and I really like how it turned out. 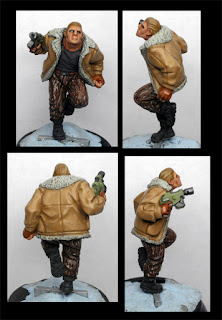 I'm really pleased with how this figure turned out, despite the hand cockup,I am now struggling to base the figure on my customary 2p pieces though due to the pose! Its a fiddle but I think it will work out okay.

I have a couple of 2013 projects to work on, they are (in no particular order)

1. My Scots Covenanter army for VBCW

2. Completion of buildings and other bits and bobs for Junes Partizan game (although its still early planning stage so not sure exactly how that will end up yet)

3. Not figure related but my other geeky hobby is PC gaming and I'm going to have a bash at building some switch control panels for use with flight simulator games (thus proving that if its a geeky hobby I will probably do it)