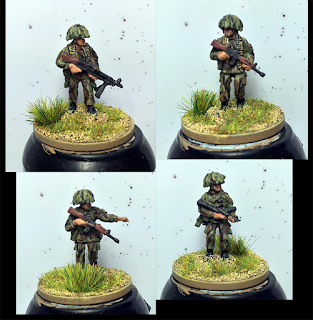 So another year begins, perhaps I'll manage to get a bit more painting this year, but I suspect not whilst the lead pile will no doubt simply continue expanding with a life of its own, at least thats what I tell the wife.

That said I did find the time to slap some paint on another 4 of the Elhiem cold war Brits. As ever fantastic sculpts that are frankly better than some 28mm things I've painted over the years. So with the 4 completed previously I have my first section, another 8 on the painting table but my old comrade WW2 seems to be calling again as a stack of 20mm British Late War infantry have appeared as if by magic on the painting table.