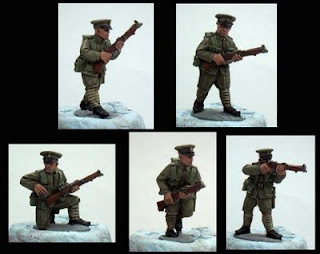 I have spent this evening painting up another five of Musketeers early world war 1 British infantry. These five bring my total WW1 force up to a full platoon. I have an officer and a Sergeant left to paint up to lead these chaps.

Outside of this I had some time to pop up to Partizan at the weekend and picked up Mr Hick's new model, the Croydon Crusher, which is a sort of 1930's quad bike with a heavy machine gun, designed for use with VBCW. I have some plans for this model to make it even odder looking, but more on that in the future. Apart from that I purchased a rather nice Vickers tanks from BEF in resin which I will try and get put together at some point.
Posted by Smillie at 14:55 1 comment: 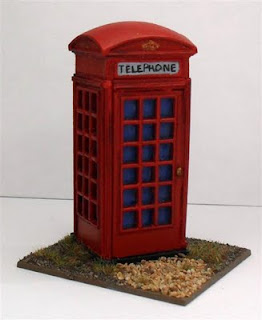 Having bumped into Paul Hicks at a wargaming event last weekend I was able to purchase this lovely 28mm model of a telephone box from him. I couldn't resist painting this up and getting it based. I love how it looks and will be looking to pick up the post box he has also made. I believe Paul will be selling these through his own site "Mutton Chop" in the near future but in the mean time he can be contacted via the Gentleman's Wargaming Parlour. ﻿
﻿ 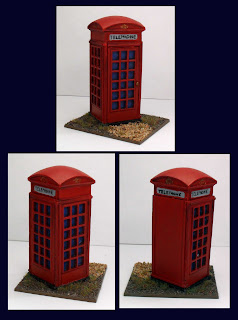 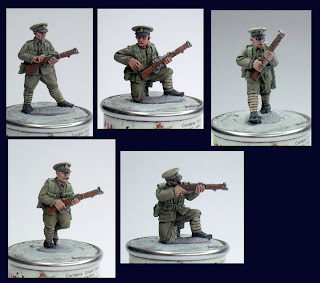 Having recently received my order from Musketeer Miniatures I painted up these 5 chaps last night. I like how they turned out and they, and the other 7 models I have will bring my WW1 force up to a full platoon. I think what my force needs now is some light armour for use in VBCW and perhaps some artillery!
Posted by Smillie at 06:29 1 comment:

Bit of a sniffle

Saturday just gone I spent a very enjoyable days war gaming at a small event organised by Mort from GWP. The games were all VBCW and the goal was for the Anglican League to push through the defence lines of the SFF into a village they had been using as a raiding post. I was playing Anglican league and whilst I had a fun day I did not fair particularly well in terms of the battle.

Pulling some unfortunate "Random Event" cards my force ended up dropping dead as a result of an outbreak of the Spanish flu, this resulted in a fair amount of my force retiring from the battle each turn. In addition to that half way through the battle I pulled another random event card which resulted in me losing comms to some of my remaining units. Sufficed to say while I managed to whittle down the opposition and knock out a tankette my sickly army did not make it onto the main table.

Still a great game played against, and with some top chaps. A couple of pictures below (I forgot to take many during the day so these are the best ones). 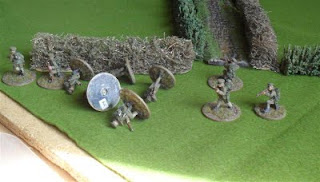 Playing against Ook from GWP, this is the result of his first shot against my units with a mortar which was being fired from off table as support. 5 out of a 10 man squad wiped out! 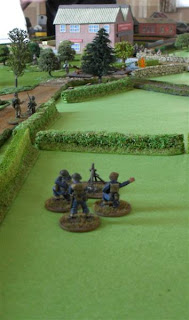 Later in the game, I manage to knock out Ooks tankette with a lucky mortar round that scattered off his infantry and onto the back of the tank. Two lucky dice rolls later its main gun was destroyed and the tanks crew were both wounded. 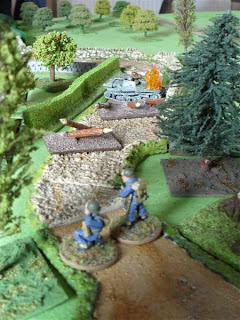 My mortar team moves up to inspect its  work after Ook has withdrawn his forces off the table to the main SFF base/village.
Posted by Smillie at 11:56 No comments:

A couple of chicks! 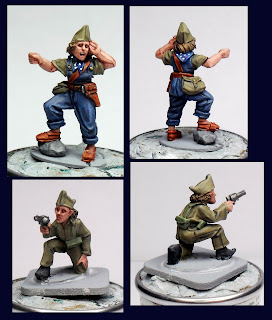 The pistol wielding model is painted up as an LDV/Home guard volunteer. The standard bearer (which needs a flag) has nice blue overalls with some LDV kit. I enjoyed painting these two although I don't think I have much use for them gaming wise at the moment.
Posted by Smillie at 13:51 No comments: 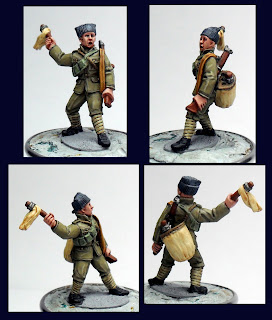 At Christmas just gone my good lady wife bought me the WW1 trench raiders set from Musketeer Miniatures. For some reason, laziness I expect, I never got around to painting this chap. Any way I painted him up in a couple of hours this afternoon and am pleased with the results. I have just ordered another WW1 infantry squad from Musketeer so will be adding to my little early ww1 infantry force.

I'm also toying with buying a set of WW1 ottoman infantry in fezzes from Gripping Beast, although I can't think of a practical use for them at the moment so I'm resisting.
Posted by Smillie at 08:10 1 comment: 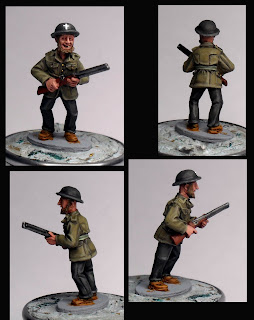 Towards the end of this month I'm going to a games day where I will be fielding an Anglican League force in a VBCW game. I don't have a particularly Anglican themed force but I have a couple of character figures who can quite nicely lead my fairly generic infantry force. I had this model from Paul Hicks knocking around and thought it would do very nicely as a fervent and angry verger!

Fun and quick to paint I think this model will fit in quite nicely on the day.
Posted by Smillie at 13:07 3 comments: 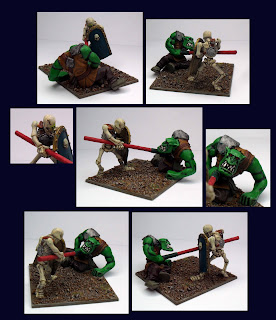 I have had this model of a wounded ork knocking around for a while now ( I think he came as an "extra" in another GW kit) but I didn't know what to do with him. As I didn't have anything else to paint this afternoon I sat down and came up with this little diorama. I really like how it turned out, especially as I don't paint GW fantasy miniatures very often.

I spent a little time making one of the Skeletons eyes glow, which I think looks quite good and gives the model a bit of an evil look.

I think I might build a slightly larger base to mount this on in the future, but I'm happy with it for the moment.
Posted by Smillie at 13:55 No comments: 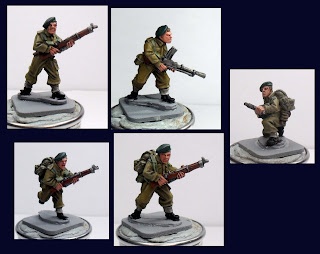 I spent yesterday evening finishing off my commando section. Completed the last 5 of my commandos from Artizan Designs. I like how they turned out and think they will fit quite nicely into any WW2 or VBCW force I may raise in the future.
Posted by Smillie at 02:34 No comments: 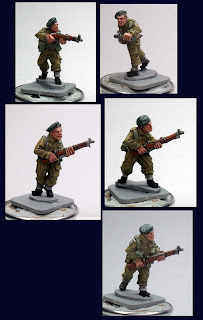 Just finished painting up the first 5 models for my 10 man commando section. The models are from Artizan Design and are up to their usual high standard. A nice result and they only took me a few hours yesterday evening.
Posted by Smillie at 06:28 No comments: 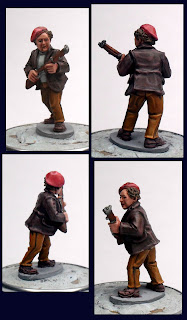 Painted up this other new Paul Hicks figure for my VBCW force this morning. Should fit into a Militia squad quite well.
Posted by Smillie at 03:40 No comments: