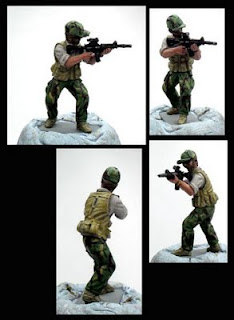 Having been forced out of my bed rather early this morning as a result of shopping being delivered or something equally boring, I had plenty of time to crack on and paint this.

The figure is from Empress, specifically their Modern Combat range, one of the SAS sets. I have been very slow in painting these up, despite having bought them some months back I think I only have two others painted (one of which is in an earlier blog post).

I have not previously tried to paint any sort of splinter type camo as it looked tough. However I thought I would have a bash at it this morning. So having grabbed an old pair of CS95 trousers for reference I cracked on. In the end I painted the trousers and baseball cap in CS95 camo pattern, and I am very pleased with the results. I will definitely be painting some of my other Empress Moderns up in the same sort of fashion as I like how the camo turned out and as I think it makes the figure look really nice.

Anyway trumpet blowing over, I hope any observers like my attempt at splinter camo.
Posted by Smillie at 05:05