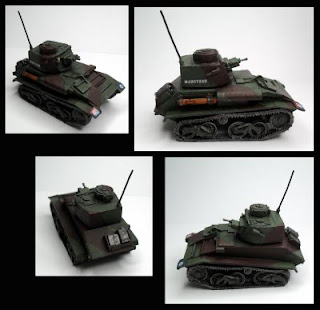 I have spent the last couple of evenings working on this little tank which I picked up at Partizan. This is a Vickers Light Tank kit produced by BEF Miniatures. The kit is resin with some metal parts, namely the tracks, cupola and gun, in addition to the oil cans in the stowage in the back. The kit is really quite nice, with crisp detail and not to much flash. In fact the only flash I had on my kit was one of the track sections, but this only took a few minutes to clear up.

One slight problem with my kit was the exhaust pipe had (for some reason) not been included. Still I managed to scratch build the one in the picture using some bits and pieces I had, and I think it turned out okay. I also scratch built the clamps holding the exhaust pipe on as it didn't look right just hanging there. Again I think something was supposed to come with the kit.

I went for a simple Green and Brown paint job with some transfers scrounged from another kit I had in the cupboard.

All in all a nice little kit which I would recommend to anyone looking for an early WW2 tank, I will certainly be getting another one at some point in the future.
Posted by Smillie at 10:19