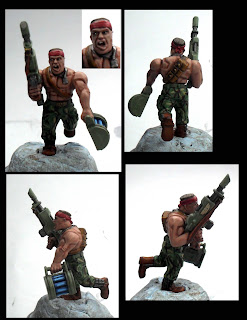 Whilst waiting for some models to be delivered I thought I would keep my hand in (as it where) by painting up this model from Games Workshop. The figure is a bodge of some bits and pieces from the same set.

Now I'm  just going to come out and say it, I really hate these figures from GW, I bought a box of them last year ( I think) for another project and hated every minute of painting them.There supposed to look like Rambo types but they just look like an oversized ken doll to me. Any way this guy was knocked together from the left overs of the box.

The posture on the carrying arm is a bit off as the hand originally had a knife in it and I think was supposed to be pointing skywards. But it was the only arm I had left and I didn't want a figure waving an oversized butter knife in the air. So I cut the knife off and fitted the ammo pack thing.

Have to say I am not dissatisfied with the result I just can't really warm to the figures as I don't like the sculpting style. Anyway it was still fun to paint and I quite like the result, and my paint job on the ammo pack ( I went with an otherworldly energy weapon type thing as opposed to just brass.
Posted by Smillie at 15:42