Why 28mm and I are going through a trial seperation 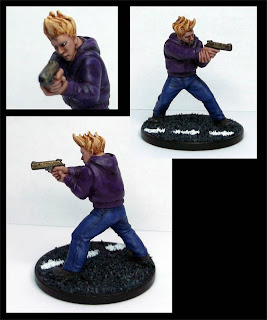 Just finished painting up this figure from Hasslefree, I wanted a manga kind of look for his top and hair, and of course his golden gun. I'm reasonably happy with how it turned out although I think on reflection the purple is a bit flat and needed more highlights/shading.

As the name of the post suggests I'm having a trial separation from painting 28mm (mostly). Over the last 3 years or so I have painted a lot of WW1/WW2 type stuff in 28mm which required me to finish squads and platoons etc. As a result I'm actually quite tired/bored with painting units of beige/khaki 28mm figures, equally I just don't seem to have the stamina to paint the same colour scheme over any groups of 28mm figures at the moment.

So I'm going to have a break. Instead I will be working on my 6mm projects, and "single" 28mm figures so Zombies, post apoc or fantasy figures that are not part of units but would be on their own so I can just work on that one figure without feeling I have another 9 to do before its finished.

I'm sure I'll end up going back to collecting 28mm army's but at the moment I'm a bit fed up painting tons of 28mm and I have enough troops for the games I actually game (VBCW) to not need more troops.