I've been a bit quiet of late, I was struck down with the flu a few weeks back and then had a whole load of work to catch up on as a result, so have not had much leisure time. However I had some time to spare yesterday evening and painted up this figure from Artizan Designs.

I wanted all the colours to mesh nicely with each other and I'm pleased with my colour choices, the tweed on the flat cap could have been better, but you can't win em all.

Now I am a big fan of Artizans figures, my display cabinet, and cupboards are bulging with untold numbers of their figures. However I was a bit disappointed with the casting on this figure. The face seemed a little miscast and the detail was lighter than is usual with Artizans stuff. The bigger moan though is the shotgun which the figure is carrying. The barrel is very thin and bends really easily (as is evident in the picture). This was a bit of a departure from the norm with Artizans figures as I usually have nothing but praise for them.

It is still a nice figure its just let down by just two relatively minor points which were a touch irritating.

In other news my Ginger Tom Loki was unusually compliant last night and not only let me take a picture of him, but endured having my scarf draped around him in a dapper fashion! 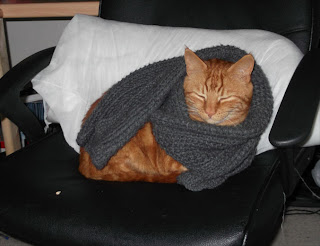