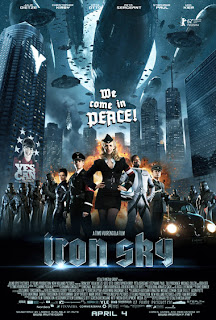 Just thought I would hop on my soap box this morning as I received an email advising me that the distributor (revolver) for this bloody funny looking film has decided that it will only be released in the UK for one day. This is obviously plainly stupid. The team that have produced the film are trying to get a wider and longer UK release and have setup a website to ask for the film to be released in your area.

Go here http://www.ironsky.net/site/support/how-to-support/ and sign up to show your support and get this film released to your area. I for one have signed up as me, my wife and Dad all want to go and see this and currently its not being released (it seems) in Aberdeen.
Posted by Smillie at 02:21