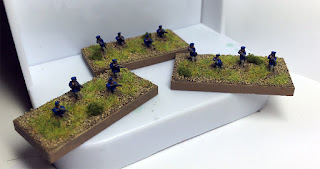 Its been a busy work month so I haven't had much time for painting, also i'm currently waiting on some orders to appear for some cold war and modern conflict 6mm projects. In the interim I decided to make a start on my imagination scifi project as I really wanted to get something painted.

Despite having not painted anything Games Workshop based in a very long time now I still obsessively read the books and fluff, there is just something about the universe I really like. So I thought why not make up my own army and create it in 6mm (far more affordable).

The Imperial Settlement on Natalian II is a rural farming planet at the very edge of Segmentum Pacificus situated close to the inward edge of the Sabbat Sector.

A rural world, the planets main exports are food and man power for the Adeptus Militarium. The planet has long been a low priority for equipment and arms. As a result the PDF is poorly armed with late model laslocks and little in the way of modern vehicles.

The majority of the PDF is truck borne, with some limited units benefiting from lightly armoured halftracks.

The original founding settlers were led by an imperial family by the name of Castius hailing from the Mordian home world. The current head of the family is the lady Natalian (a popular name on the planet) Castius who is the Governor of the planet.

The Planet sits in a system comprising of 4 planets 2 of which are little more than dead rocks sporting Adeptus Mechanicus mining operations. The remaining planet consist of 1 gas giant with an orbital refinery.

The system has limited defence fleets, and no standing garrison. Despite being under resourced the PDF sport colours reminiscent of the Mordian Iron Guard, though that is likely where the similarities end.

The planet has an Arbitus overseer but other than that the policing actions on the planet are all locally sourced.

So I painted up 6 stands of infantry, the figures are from the Baccus WW1 range mainly as I had them lying around. I'm quite happy with how my fictional little army turned out. I'm thinking as the PDF are under strength 3 stands is a Company (1 stand is a platoon), so 6 represents a half strength Battalion with no HQ, transport or support equipment.

I have some command units undercoated and intend to add some vehicles in due course, I just need to find some suitably 40k type vehicles. 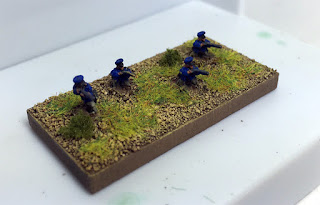 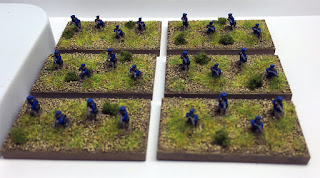