Well I completed another squad of my modern red coats, and a heavy weapons team. Again these guys are all repaints and I like how they came out. Some of the faces are a bit rough as the build up of paint on them from the earlier (poorer) paint job had covered over a bit much detail. Overall though I think there good to go!

Picture quality is a bit poor as I am working away from home at the moment and don't have access to photoshop to increase the light level. 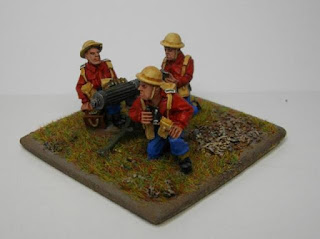 Heavy weapons team, was fiddly to repaint as its all mounted together on one base, turned out okay though. 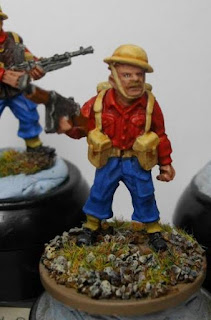 For some reason this Artizan figure reminds me of my good friend Mr Ook from GWP, I have no clue why, and unless my memory is playing tricks on me he doesn't have a mustache. So no reason why but for some reason I think he looks like Ook. Also just looking at the picture I've realised I didn't paint the figures buttons. So need to sort that out sharpish!

Just a few more figures to paint up as the command squad and my platoon for Partizan is ready. It will also be the first time in a while I have fielded 30 troops who all look like the same unit. I'm usually distracted by shiny things before I get to the 30!
Posted by Smillie at 05:39