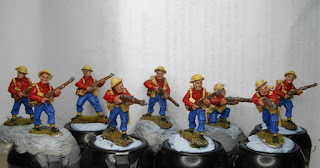 I've not been entirely idle the last couple of weeks. I have painted up 10 more modern red coats for use as the Friends and Rememberers of Rorke's Drift (F.R.R.D) which is my little VBCW force for use at the other Partizan next month. Some of us chaps from GWP are putting on another demo game, same as last year, and earlier this year (Different game each time). I know there are only 9 guys in the picture, one of them is undergoing a bit of surgery as the legs snapped.

Which leads me quite nicely to the paint job quality. There a bit rough around the edges as they are re-paints of figures I painted about 2 years ago. I already had one squad of these guys but I needed another two so hence the re paints. I have another 10 and a command squad and machine gun to paint before 2nd September (no pressure right)

Anyway more to follow, and if your coming to Partizan pop by. 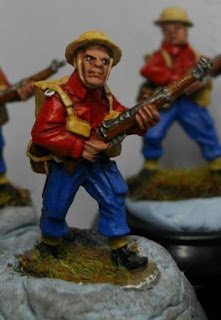