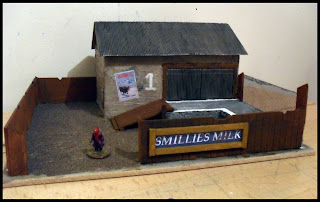 I have been working on this off and on for a while now, and spent this afternoon getting it to the point where it is almost finished. Its supposed to be a depot/warehouse of some sort for use as either a general terrain piece in a VBCW game or in smaller pulp games. Its not quite finished yet, I still need to build a gate, and finish of the ground work of the yard. And the edge of the base needs painting etc. But it is mostly finished.

The name "Smillies Milk" was the wife's idea, I mentioned it was supposed to be a depot of some sort and she said that she thought it looked like it should be where milkmen went to pick up their round, so "Smillies Milk" it was. The sign was knocked together in photo shop and added with a balsa wood frame. The other posters were either pulled from the web and downsized by me, or supplied free of charge by 6milphil of GWP.

The roof comes off and at some point in the future I will add an interior, and I will need to make up some crates etc as scatter terrain around the base. Not the greatest looking terrain piece in the world but, not to shabby by my standards. It also fits the important criteria of having to fit on my model shelf.
Posted by Smillie at 15:24