I say where's my weekend gone? 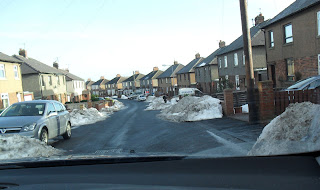 Well thanks to mother nature dumping a gazillion tons of snow on the north of England and Scotland I found myself being called at home on Friday night and asked to go to Newcastle a mere 3 hours and 200 miles from the house to investigate some claims. Well I say some what I really mean is lots, in and around Newcastle on Saturday followed by more in Newcastle and then on the way home today.

It was a very long knackering weekend, having worked all week to then get tasked up the road to Newcastle quite late on Friday. Still pays the bills.

It was clear though (as can be seen in the picture) that Newcastle really has had some snow!

Down side was I didn't get to do the painting I wanted to do. On the upside it meant my wife couldn't force me to clean out the cupboard under the stairs, so not a total loss then.
Posted by Smillie at 12:41