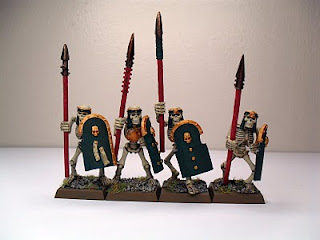 After many months painting things blue for my Imperial Guard army I fancied a break. So I thought I would have a go at a Tomb Kings army. I've not had much success at horde army's in the past but I have always fancied having an undead force and I wanted to paint the "badies" for a change.

I went for a dark green as my primary colour which I think looks really good with the gold. For a change rather than spend ages constructing and then struggling to paint the model's i undercoated the sprue in white and painted everything on the sprue. This was much faster and easier than usual and now I'm going to undercoat the other sprues to finish my first batch of skellies.
Posted by Smillie at 11:05