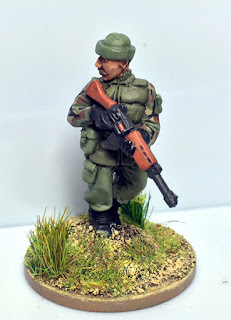 Been busy with work of late, but have managed to get another two of my 1970s troops finished. These are from the Gripping Beast Argentinian range but they do fine service as a couple of squadies in soft cover patroling rural areas. My picture taking skills are as shoddy as ever so the pictures are a bit washed out. 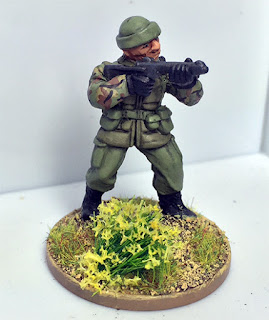 On the work bench I'm busy converting some Crooked Dice Minions into RUC/1970 Armed cops by adding some bullet proof vests. Hopefully get them onto the painting queue today.

In other news my nostalgic urges have been aroused by the new Gamesworkshop Genestealer cult miniatures. Personally I don't think they are as nice as the lead ones from back in the day but I am tempted. However in standard Gamesworkshop style I have been put off by the horrifying price of some packs.

The squad size plastic box sets (10 figures) are not horrifically priced, though are still high by comparison to say a platoon box from Warlord which is the same price. But the leader box of 5 figures is over 30 quid which seems a bit steep, particularly when GW have already paid for the tooling as the figures are all from their Overkill board game that was released some months back.