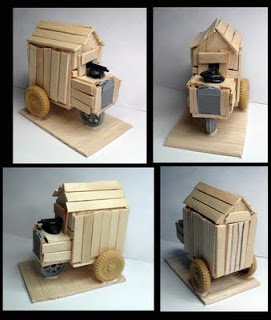 I just had to pop up some pictures of this. Now as fellow VBCW fans will be aware the rather madcap world of VBCW inspires madcap creations. Well I have wanted to build something a bit wacky for a while.The idea of an improvised armored car disguised (badly) as a garden shed has been something I've wanted to try.

This turned out a bit bigger (taller) than I was expecting so I will just say its built on the chassis of a tractor, which explains it being quite tall. Its basically a very lightly armored car with a vickers at the front, which looks like a garden shed. Making rural recon easy :)

I'm in Glasgow tomorrow for a job interview so it will probably be Saturday night or Sunday sometime before this is painted. There are some little things still to add, hinges on the back door stuff like that, but generally speaking I'm pretty pleased with my construction.
Posted by Smillie at 12:47