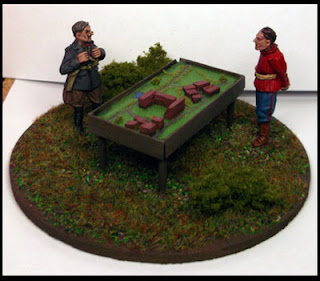 This is the little project I have been working on for the last couple of days, this is for this years game at Partizan and (sad as it is) is a tiny version of this years table layout!

This is supposed to represent the senior Royalist/BUF officers preparing their assault on Leicester and it roughly matches the local map. With the village of Evington in the corner nearest the officer in the red top, North Evington Infirmary is the large building in the middle (see my earlier "Hospital Build" terrain posts) and the outskirts of Leicester itself at the end of the table in the foreground.  Its a silly little thing but I like it and it came out pretty well, all things considered. Obviously its not been made to scale or anything but I think it looks okay and works well as the officers sand table.

Top down view of the map 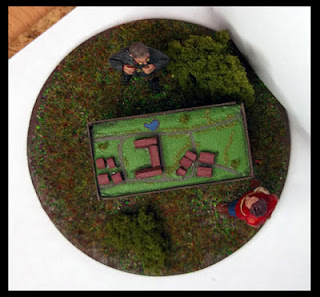 The camera has done something a bit weird with the colours so the red looks much glossier than it is.
Posted by Smillie at 15:52