You may recall a previous post which showed off the 4 Company's which make up the Infantry elements of the 2nd Battalion Seaforth Highlanders which in turn form part of the larger 51st Highland Division which I am working on.

Well having finished most of my Partizan stuff I had time last night to paint up and base 4 of the stands which are part of 2nd Battalion's support elements.

As before I have tried to make the command stands as little diorama's and I'm pleased with the results. I painted the trucks just green and canvas this time as the camo pattern on my previous ones was not working for me, and wasn't really accurate anyway. Not pictured are the previous Company HQ stands which I have also repainted to match these. 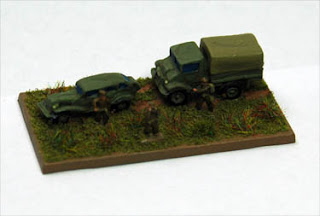 This is the Battalion Commander stand, which comprises of 3 figures a truck and staff car. 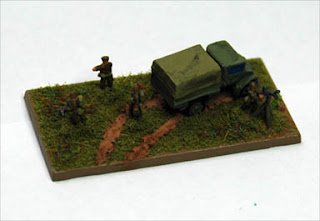 AA Platoon, which in this period in an infantry Battalion was just the Bren Gun mounted on the air defence tripod. I modeled this to look like one team has already setup and the other two have just piled out of the back of the lorry and an officer is pointing them to their setup point. 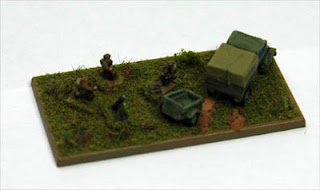 Mortar Platoon, in time I might make some stores to put in the trailer from putty or something. 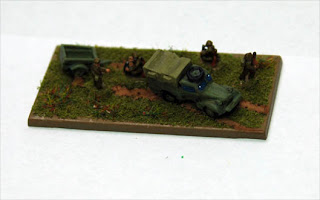 Signals Platoon - I just decided to go with a Tilly and trailer here. I think in reality these guys had a truck, but I went with the Tilly as I used to be in Signals in the RAF and we rocked around in land rovers with trailers so I went with this as the period equivalent! I overdid the reflection on the glass a bit so the front of the Tilly looks a bit like it has eyes, but its all good.

The Pioneer Platoon is more difficult, in reality it had access to Motorbikes (one I believe) and I would like to model this, if anyone knows if any figure makers make a 6mm motorbike please leave a comment, otherwise I will bodge one from putty.

Once the remaining Platoons are painted (I only have the Pioneer Platoon to make) the 2nd Battalion Seaforth Highlanders will be complete!

The benefit of building my units in the way I am is that I can use the stands to represent Platoon's and Company's or squads depending on what size of 6mm game I wanted to play.

As you can see I have a hell of a lot to do before this project is anything like complete, but its meant as a seriously long term project as the Division's history in the early period has always interested me.