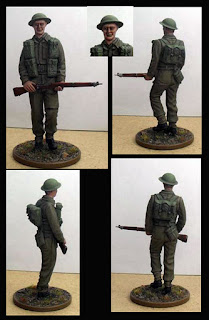 I'm currently waiting on some 20mm WW2 stuff to trundle through the post, and as I'm moving house and starting a new job at the start of next month I am sort of avoiding starting anything "serious" from the lead pile. However I was pottering around Hobbycraft on Saturday with the wife and picked up a set of Tamiya 1:35 British Infantry.

Now of old I am a diorama builder (in 1:35 scale), purely for my own enjoyment you understand, so I thought I might have a bash at painting up some 1:35. Now I haven't the time or inclination at the moment to build a small diorama but I have space to build and store the 5 figures which come in the Tamiya set. So I thought I would paint them up and base them, who knows I might even build a large scale skirmish set!

The above figure is the Bren Gun Ammo Carrier from the set, I built and painted him on his own as I wanted to see if, A, I could still paint in 1:35 and B, if I would enjoy the experience. Well I blooming well did enjoy painting this chap up so I have the others on the modelling table. A nice little set for around £8 (might be a bit less but I lost the receipt) the rifle is from a Dragon set that I had, I used it for no other reason than I had it.
Posted by Smillie at 16:29