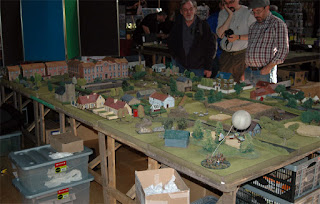 This weekend was Partizan in Newark, as per usual Panzerkaput and myself came up with and put on a VBCW game. It was a busy year with about 10 of the guys of the Very British Civil Forum turning up to game the demo in the end ,which made for a frantic but very fun game.

The game itself was set on the very edge of Leicester with Royalist/BUF forces attacking the city through the Village of Evington aiming to capture the General Hospital (the large building in the background of the picture above) As far as I am concerned the game was a roaring success we seemed to attract a fair bit of interest from the public and I spoke to lots of people about the game and terrain etc.

I was particularly pleased with how well my Hospital and terraced housing looked on the table as I had built both in relative isolation and was worried pretty much right up until the moment people started gaming that they would look too big or not right etc. 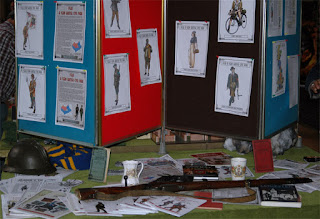 This was our "period" display at the end of the table, Art and background on the battle by Panzerkaput with period weapons and equipment provided on the day by our forum member Captain Bigglesmay, who also spent the whole day in WW1 British uniform with webbing. Given that I was wearing jeans and a Shirt and today my back is killing me, I shudder to think how sore he must of been by the end of the day! 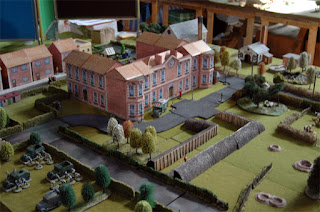 Picture of my Hospital on the edge of Leicester, I was so pleased with how it looked on the table! 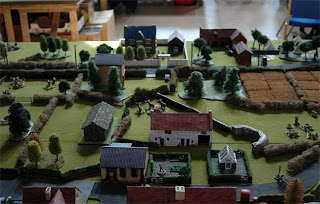 More of the table with buildings brought along by a number of our forum members. Tym off the forum built the wonderful allotment squares seen in the bottom complete with greenhouse! 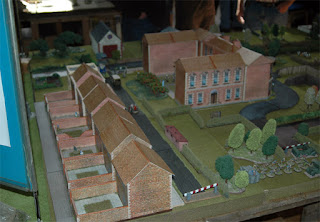 Another shot of my Hospital and my terraced housing which I used to edge the board. 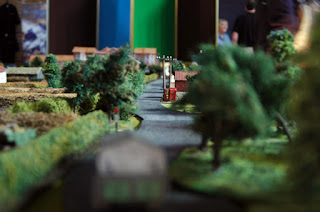 Arty shot looking down the road towards the Hospital (just visible) I was really pleased with how "full" the table looked. 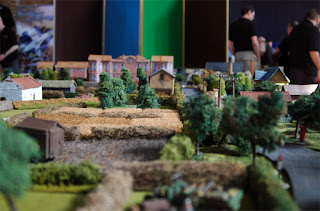 More arty farty picture taking, again I am chuffed with how nice our game looked. 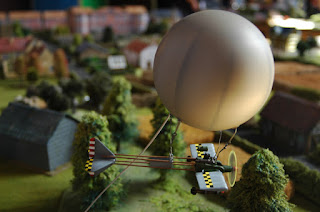 Shot of forum member Burnin' Coals Mower Bomber, words cannot explain how fantastic this looks in the flesh, there are more pictures of this over on the Forum and it really is a work of art. 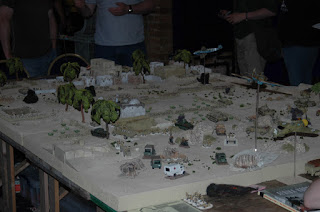 And what with spending money, chatting, and minding our own game I completely forgot to photograph any of the other lovely games which were there. However I did take this snap of my personal favourite which was this WW2 Desert Scrap which was on the table behind ours. The figures and terrain looked amazing and there where some great entrenchments which had been built into the terrain boards so they were actually below ground level.

Loot wise I picked up loads of ECW figures for my Scots army and some Warbases 2p multibases so I can have the figures for skirmish or bigger battles. I got some Highlanders from Warlords which are nice sculpts but I think I may now be a devotee of the Perrys. I have not previously looked at their ECW range in the flesh (as it were) but had a look at them on Sunday and bought a load of their Scots straight away. Nice simple, but detailed, clean sculpts and lovely casting, I think I was paying something like £6 for 6 figures so it was great value as well.

The question of what to do to top this years game is immediately at the front of my mind (being the sad git that I am) and I do have a probably over the top, difficult idea which I will probably start planning quite soon.

Thanks to everyone who came and said hello and looked at our table, Partizan felt very busy this year (which was great) and I had a top weekend.