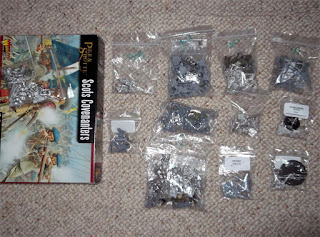 So I've come to a realisation, I will probably never get round to painting a lot of what is sitting in the "lead pile". So Rather than sit on the pile having it take up space for no reason I have decided to have a clear out. This is by no means all of my lead pile but is a lot of stuff which I doubt I will ever paint, or wont paint anytime soon.

So I am looking to shift the lot as, for convenience sake, a single lot. As such I am offering a big discount on retail for this lot.

The pile consists of

40 Warlord Plastic Scottish Covenanters (with metal command) still on the sprues except for about 5 figures worth of bits which are in a jiffy bag. Nothing painted

8 US Vietnam era troops from The Assault Group Undercoated only

1 LAF Figure (one of the medieval lady cook ones)