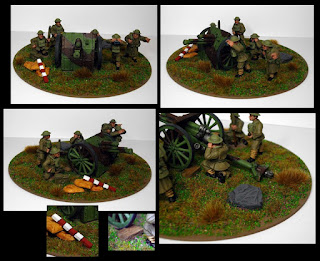 Some may remember I painted up my renegade miniatures 18 pdr cannon crew a couple of weeks back, and couldn't find anything knocking around to base the gun on. Well after digging through the cupboards last night I found a freebie music CD which I didn't want (dolly parton if anyone is interested) meaning I could base up the gun.

I decided I was just going to base the gun and crew as one, my thinking being that a gun crew is unlikely to be much use if it takes a couple of casualties anyway so why worry about not being able to remove the figures.

I added a couple of small things, the range stick, rock and wooden chocks behind the gun wheels. As well as the little pile of sandbags which I think came from a 1.35 model kit. I really like the final result and how the base turned out.

In other news my dad was on the Scottish news following the snow fall in our village, much to the families amusement. Apparently he was out walking the dogs this morning and the news crew were looking for people to say something about the weather, which he dutifully did.
Posted by Smillie at 12:25