Hospital (with Figures) and brick Walls 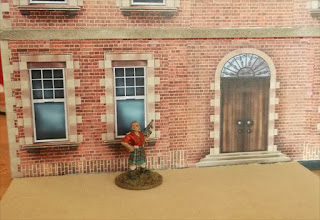 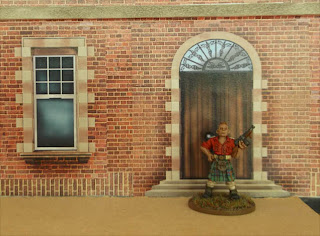 At the request of a couple of people I have taken some pictures (or tried to at least) of a figure with the building so you get an idea of scale. As I mentioned yesterday my proper camera is on the blink at the moment and my back up camera is a bit crap. Hence the pictures are not of the highest quality. I also couldn't take a picture of the whole setup with figures because I just didn't have anywhere I could set it up and get enough light.

Anyway above there are a couple of shots with one of my figs by the main buildings doors and windows. The buildings are all built to the same scale so the figure will look the same with any of them. A couple of points to note the windows on this building (here and in reality) are big double size Victorian windows equally the door is the sort of external double sized porch thing you get on Victorian buildings.

Another quick point to note the Figure is stood on a bit of MDF I had lying around as I will be building a grass/stone path thing which is the same thickness as the MDF the buildings, and a courtyard behind it. 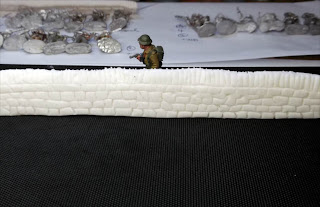 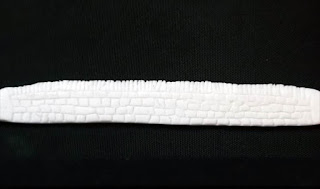 The Other thing I have done today is sculpt a wall for casting by me at a later date. The wall is sculpted out of Fimo (white glittery Fimo at that) and needs cutting and sanding before I can cast it but my plan if this casts okay is to make corner units as well so I can cast my own country walls. Again sorry for the poor pictures but it was a struggle to photograph white Fimo.
Posted by Smillie at 03:26