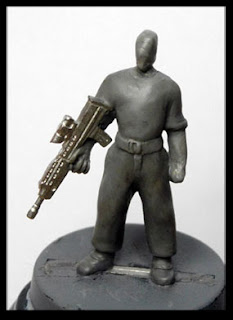 I thought I would post up a picture of this part finished sculpt I have been working on since Christmas. I have wanted a figure suitable for modern/post apoc gaming for sometime that is armed with an L85.

I know Empress has modern British infantry but my issue (which seems petty) is the version of the L85 which the figures have. I was in the RAF for 4 years and I want a figure armed with the L85 that I remember from my service days.
So I picked up Hasslefree's L85's and decided to sculpt my figure around it.

Its been hard work, and I know its not really all that good, but I'm really pleased with how it looks. I still need to do another hand, the head and details on the shirt. I'm probably going to give the shirt a collar and then possibly pop a flack jacket over the top, but I'll see how it goes.
Posted by Smillie at 14:15