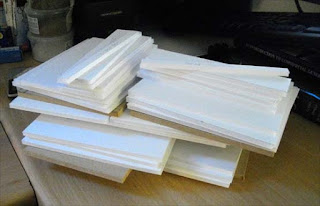 Just a quick little post about what I have been doing for the last few days. Myself and some of the chaps from The Very British Civil Forum are again putting on a VBCW game at Partizan in June 2013. Our game this year follows on from last years game and is the Siege of Leicester.

The focal point of which is going to be Leicester General Hospital (not the Royal Infirmary in the city centre) The above is a frankly rather large pile of bases and foam board I have just finished cutting down to make the majority of the Hospital.

Once this is assembled I will need to make two smaller wings which run parallel to the main building. There are actually more than two wings but unless we wont to have an insanely big table I had to simplify the Hospital a little.
Posted by Smillie at 07:44