Not your normal suit 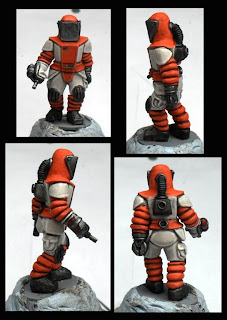 I picked up two of this great figure from Gripping Beast on a wim recently and decided to paint one this evening as I have been painting DPM for a while and fancied a break.

The figure itself is sculpted by Soapy and as I understand it he sculpted it for his own collection and the figure stirred up enough interest for the Beast to decide to stock him. Anyway he is a great little figure, and a bit different from anything else out there. Certainly I don't know of many other manufacturers producing anything like this.

As I said I have been painting DPM for a while so decided to go for some colour as I have no planned use for the figure and just picked them up on the basis that I thought they were great. I love how he ended up, and  the colour scheme was exactly what I wanted. I have another one of these models which I will slap some paint on at some point but probably a different paint scheme.

As an aside these figures are only £2 from the beast which I think is great value.
Posted by Smillie at 15:44