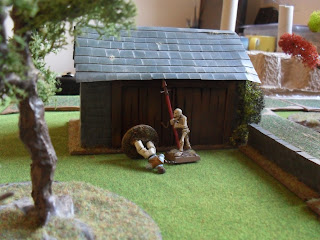 My wife and I played our first wargame together today! I have been badgering my good lady, who always goes on about us "doing more together", for some time to have a go at wargaming as she said the pictures from the last big game looked like good fun.

So having done a fair bit of research I thought Strange Aeon's would be a good game for us as theres lots of variety in models, and scenarios. I downloaded the demo rules which only requires 5 models to have at each other with.

I played the goodies, threshold agents out to save the world, and the wife played the baddies, lurkers who are cultists and demons trying to undertake nefarious plan's and so forth. The demo is a straight up fight between a quite tough threshold agent and a slightly weaker counterpart, versus a cult leader, minion and a zombie! I didn't have any zombie models so the GW skeleton had to stand in.

The game started quite slowly with us both starting on the furthest table edges from each other. We spent a couple of turns moving towards each other before clashing by the T junction in the centre of the table, near the old barn.

This was my first rules challenge, the demo rules don't have rules for climbing and my missus wanted to pop one of her chaps onto the roof of the barn, after a quick think I decided we would just role a d6 and she would have to get 4 or more to succeed, with 1 being a fumble resulting in a fall from height. Rolling a 2 the evil cultist neither climbed nor fell and instead spent a turn studying the side of the building and its interesting cracks!

Meanwhile I maneuvered my lead character round the side of the building and blazed away at the cultist, after 2 turns of shooting I couldn't seem to hit the bugger and the return fire was equally in effective. However I failed to notice that my wife's zombie had stumbled up behind me. Despite being able to fend him off in hand to hand combat, the horror of being faced with the undead was to much and my glorious leader failed his resolve test and collapsed catatonic at the zombies feet. This resulted in him taking a major injury and being removed from play.

Down to one model I moved round the side of the barn and manged to cut down my wife's cult leader and minion in a couple of turns of hand to hand combat. All the time with the zombie shuffling closer, I moved my last man towards the zombie and combat was joined!

Again though my chap couldn't stand the horrors of the undead and turned and fled an inch in the opposite direction, what a wimp! My wife had the next go and walked her zombie back into hand to hand combat, this threw up another rules question, I felt that as my guy was being hit from behind and running from the undead that he wouldn't be as able to defend himself so decided the zombie should get +1 in combat. Despite this the undead  seemed unable to hit my stumbling model, I presume a lack of eyes was proving troublesome, however as I was back in hand to hand I had to take another resolve test, which of course I failed, so my last guy collapsed catatonic at the feet of the zombie and took a major injury.

Victory for the wife. All in all a fun game and quite quick as well. I very much look forward to trying out the full rules when they appear in the post. Most importantly the wife also enjoyed herself, so an all round success.
Posted by Smillie at 08:40