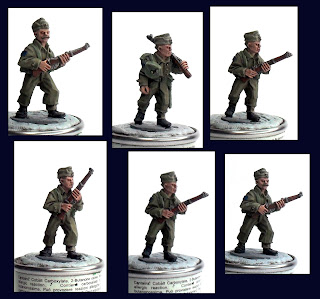 Just finished painting these guys, there's actually seven of them. Its not a weird photo quiz or something. I forgot to photograph one of the models and can't be bothered working out which one I didn't photograph.
They are from the Artizan Design "A Very Private Army" range, I really like the models, although a couple of them have pretty large mould seams which were tough to remove. All in all though they are very nice and I really like how they turned out.

These seven will be joining the officer, SMG and Lewis gunner I painted earlier in the week to make another 10 man squad for my VBCW force.
Posted by Smillie at 14:27