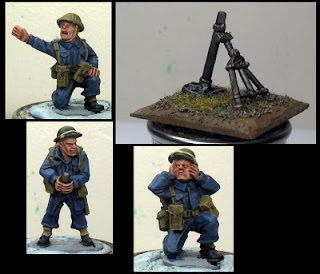 Following the recent BG3 it became painfully apparent that my force needed a bit of a fire power upgrade. So I have invested in a shiny new Mortar from Artizan Designs. I have painted it up to go with my RAF/Militia based Wittering Defence Force army, although there is no reason why they can't also be used as SFF with stolen RAF uniforms.

A nice model and a simple paint job, I just need to base the figures and finish of the Mortar base. I have also picked up a few more militia types to flesh out my army, might paint them tomorrow or later in the week.
Posted by Smillie at 15:26