Another couple of blue suits 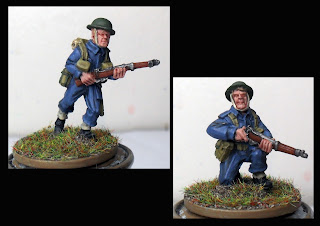 The 2nd Platoon Cmd Section is leading one 10 man rifle section and one under strength anti tank section.

I have just ordered a Mortar section to beef up the WDF's and SFF's (When I'm using them in that guise) fire power. It became apparent during the Big Game 3 that my force was lacking some long range fire power so the Mortar should come in very handy. The plan in the long term is to add another two 10 man rifle sections so that I have a light infantry company.
Posted by Smillie at 13:35