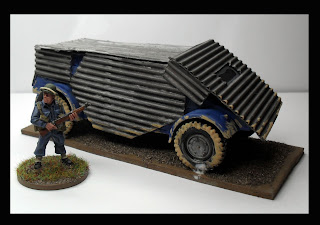 With the Big Game 3 kicking off in a matter of hours I realised I had no transport for my SFF force.

So in the last 3 hours I have cobbled together the above, armoured car, well sort of armoured.. Starting life as a 1.35 scale kubelwagon I squared of the top a bit with some foam board and then slapped a load of corrugated car on to represent metal.

All in all its a satisfactory job, I painted the hull of the car blue so that it looks like it's a civilian car which has been pressed into service. The bit of white on the front wheel is pva glue which hasn't dried yet. It'll do for the moment but in the long run something better is needed.
Posted by Smillie at 15:07