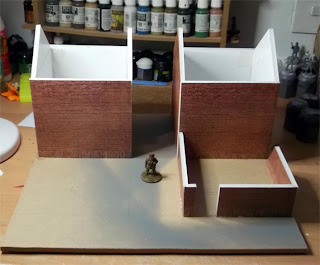 Started a new terrain project today (as well as having spent the morning doing some 1:1 modelling in the Garden with my father putting up a fence).

I need to buy more MDF and print some more textures, but I'm going to do a couple of 30cm x 30cm blocks like this with two houses on them. The plan is to leave an alley way running along the back (in the foreground of the picture) and then have a pair of these back to back so there is a car width alley between the rows of houses.

I know that having the houses fixed on a base like this limits there use a bit, but I wanted to easily incorporate an alleyway and path etc between the houses so they look better on the table. My compromise is this so you can move the blocks around and use fewer or more, but you don't have a load of separate road, and path and other stuff to get bashed about and knocked during the game.

They are based on 6mm MDF which is a touch thicker than a single bit of foam board, some probably won't like the lip it leaves on the gaming table, but I like the strength the MDF gives the terrain, and solidity it gives it on the table so people leaning in to move troops cannot easily knock a house over or what ever.

I'm undecided at the moment as to whether the roofs will be removable or not, I'm thinking not at the moment.
Posted by Smillie at 12:43