A quartet of Zombies

I've spent the last couple of evenings painting and assembling these four Studio Miniatures Zombies. They are the multi-part plastic ones which they released not so long ago. The figures come on plastic sprue as you would expect with separate arms and heads. The bodies are one piece castings, and there are only four variants of the bodies (three of which are shown above, the fourth variant will be painted in the next batch of these that I am working on)

There is a body wearing a bomber jacket, far left, figure in a v neck  2nd left ,and far right, and a body with shirt and tie. The lack of variety does mean that you have to be clever when painting these to avoid obvious repetition but I personally considered this more of a challenge than anything else.

I believe you can buy these in boxes of 30 or more but I bought them as single sprue's, at £2.50 for four zombies its pretty good I think.

Casting wise they are pretty good the detail on the arms and bodies is surprisingly good, the only area I found to be a bit weak was the heads. They suffer from mould lines (typical of plastic casting) but as the sides are kind of lacking in detail, with the hair also being a bit flat in some areas. Considering how good I found the detail to be on the bodies and arms, the soft sculpting on the sides of the heads was a bit disappointing  Although I should say they are still fine, and don't ruin the figures it just means a bit more care needs to be taken when painting to get the best from them.

I should note that these come with integral circular plastic bases about the size of a 1p coin. I decided not to remove the bases as I did on one figure and felt it was too time consuming and there was to much of a chance of cutting of a foot or damaging the figure.

Personally I found the figures painted up very nicely, and they didn't seem to take me too long. I probably spent to long on the skin which was layered before being washed with purple to give it that bruised dead look. I'm still kind of new to painting zombies so putting the gore on at the end is still a struggle for me after I have worked so hard on my shading etc!

I'm really pleased with my efforts as this is only the third time I have sat down and painted some zombies.

Shots of the individual figures are below. 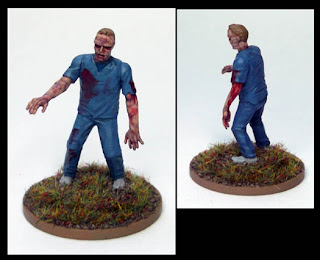 This is the V neck body with short sleeve arms, and a hair do which I though was fitting of a surgeon. I felt the V neck was very scrubs like and didn't see any reason not to paint this one up accordingly. 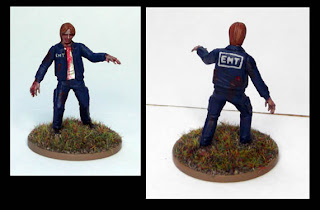 This is the bomber jacket body, which I think is pretty versatile, and could easily be painted up as a cop, road worker, biker, you get the idea. My free handing of the EMT didn't turn out all that great, but looks good enough to me. 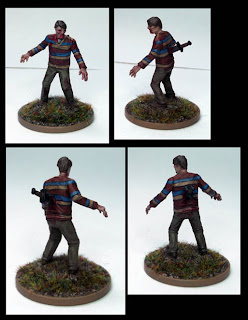 This is the V neck body again but with long sleeve arms this time. I really like how the stripy top turned out although it was really tiring to paint! This figure had a slight miss cast in the middle of its back (probably an air bubble). I could have filled it easily enough with a bit of putty, or probably even some PVA glue. But I thought I would make use of the hole instead and stuck this knife into the hole. I'm pretty pleased with how it looks. 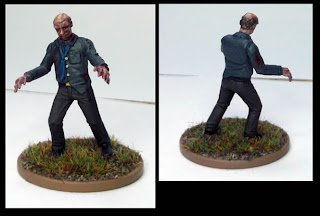 Lastly we have the tie and shirt body, with long sleeves. I just went for a basic kind of grey suit with blue tie look. Came out pretty well and the detail on the body is nice. I'm currently working on converting another version of this figure into a cop!

All in all I like these figures, they are pretty cheap and would be a good way for an existing collector to cheaply expand the collection. I will in the future be getting some studio miniature lead zombies but I can also see me buying more of the plastic ones as they are so easy to paint, and super cheap.

I should add I paint my zombies up with a US outbreak in mind, mainly because a lot of the figures out there have an american look and square buildings are easier than the UK suburban look!