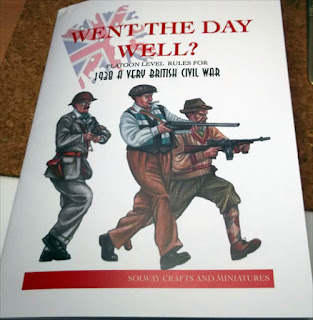 My good friend Mr "Ook" Purdue (Simon to his Mother) has just had his excellent "Went the Day Well" skirmish rules published by Solway Crafts and Miniatures.

The rules are designed for Skirmish level games up to Platoon level plus (but there is really no reason why you could not use them in bigger games if you so wished. Originally conceived as home brew rules for 1938 a Very British Civil War they would also work very well for any WW1/Interwar and they could be used for early WW2 gaming as well if you so wished, particularly if it was a primarily infantry game you were playing.

The rules have been in beta testing for over two years, and I think the end result is really good!

The rules are simple and quick but produce a "realistic" result in combat. Now my view is slightly biased as I have contributed to the rules (albeit to a modest degree) and am therefore not exactly impartial. However I heartily recommend these rules if you are looking for a nice and simple skirmish set which is easy to learn and play.

Instead of a traditional "you go I go" turn system the rules utilise playing cards to determine who has the initiative. Cards are dished out with one for each unit, and a spare. You then place your cards face down on the table next to your units, and everyone turns them over at the same time. The highest card then goes first until everyone had moved, and the same order is then used for shooting. This gives a good balance of unpredictability in combat meaning that you cannot be certain when you place your cards that you are going to be able to shoot before your unit is shot at.

Units usually comprise of 3 sections of 10 men (1 to 1 ratio) with a HQ Section and support weapons and or vehicles. In the past the guys and I have used these rules at big games with 3 to 6 players on one table all fielding a platoon or more each. Equally I have used the rules to fight very small engagements, splitting my sections in half so 2 squads of 10 become 4 squads of 5 men and so forth.

Shooting mechanics utilise the trusty D10 with units having a "to beat" score for shooting so if two units of regulars are in the open in a field shooting at each other with no cover between the two, you would roll a D10 for every rifle and have to equal or beat a certain score to hit, wounds are then rolled for on a D6 with similarly simple results. Special rules for medics etc then come into play to negate any wounds.

If there is cover between the units, or one unit is in trenches the amount you have to get on the D10 goes up, making the chance of hitting smaller. This is a simple but effective mechanic making entrenched troops difficult, but not impossible to shift.

At the back of the book  there are some random events cards which can be photocopied and used in your games. Again a simple mechanic of rolling a dice and on a certain dice a card is drawn. Some are good for you giving a unit or your side a boost or allowing you to somehow cripple your enemy, others are bad for you, such as reducing your sides effectiveness somehow. Others are more neutral and effect both sides equally. These are also nicely VBCW themed with names such as Mad Dogs and Englishment, Teabreak and my nemesis "There's a Bug that's going around", those that know me will know that I almost always pull this card which slowly kills of your forces as a result of a bout of the cold. The random events are not compulsory, and can be disregarded if you so wish, but they add a nice bit of random fun to games, and few of the cards are so debilitating so as to cripple your plans.

I've posted a couple of pictures below of the insides of the book to give you a feel for how the rules themselves are presented. They come from Solway Crafts and Miniatures as a printed A5 booklet. Refreshingly light, and sticking to just the rules the book is nicely presented with Mr Barfield's lovely illustrations, and photographs of suitable VBCW miniatures.

If you are looking for fast, simple Skirmish rules which produce a realistic and believable result to combat I really recommend these. I believe they are available now from Solway for the princely sum of £10 including postage. They will also be available from any shows which Solway attend this year and I believe "Under the Bed Enterprises carry them at games for Solway as well as the other VBCW source books.

If you are curious about the rules and are in the Newark area on Sunday 2nd June 2013 why not come along to Partizan at Kelham Hall. Myself, Pete Barfield, Ook, and Mort as well as others from the Very British Civil Forum will be putting on a VBCW 1938 game using these very rules. 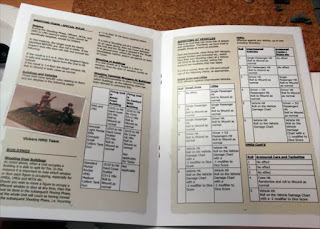 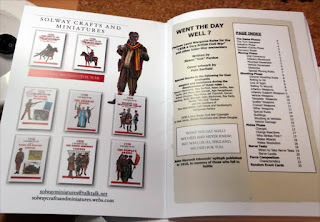