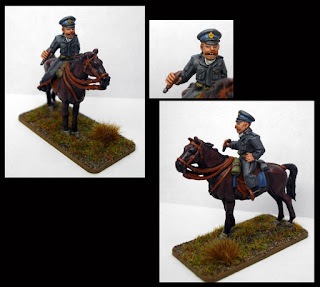 I have been working away on this figure for the last week or so. He started life as two (well three if you count the horse) different figures. The top half holding the cigar is the torso of one of my favorite Artizan Design figures. A painted example of what the original figure usually looks like is below:- 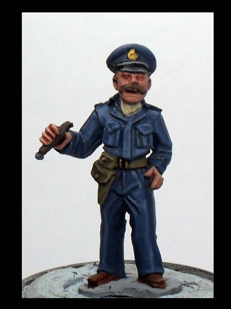 Now I have painted the original figure two or three times now and have a couple of versions of him. I just love the pose and the figure to me its just so very VBCW. But for my new Scottish Covenanter army (to be completed at some point who know's when) I wanted this figure but mounted.

So I cut the original figure in half below the belt line, losing the pistol and a forearm and hand in the process.
The torso was then attached to the legs of a Mutineer miniatures cavalry figure (no idea which one, just a random as it had the right legs). I sanded the sword scabbard off the cavalry legs and attached my torso to it. I was still however missing a right forearm and hand.

Now I'm no master sculptor but I got the putty out and had a bloody good bash (if I don't say so myself) at sculpting the new forearm and hand. Now I know sculpting a hand resting on a leg is hardly the work of the century but for me it was a real step forwards in terms of sculpting skills.

I have to say I am very pleased with the results of this conversion, I am really happy with how my hand and sculpted forearm turned out. This chap is painted in grey fatigues with a blue head band to note his allegiance to the Covenanter cause. At some point in the new year I will paint up a couple of squads of scots infantry for this chap to command, but for the moment other projects are absorbing my time.

This is probably the last thing I will finish this year, and given my poor showing on the painting and modelling front this year I feel, for me I am going into the new year on a positive finish. It has also inspired me to have a crack at sculpting again, something I'm going to try and do a bit more of next year.

My hope now that I am back and working at home again is that next year will be more successful on the painting front!