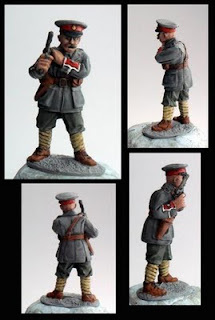 A while ago I purchased another squad of WW1 Musketeer British. As part of the squad there was this British infantry officer figure. Now to be honest my force is quite top heavy with officers as it is and I didn't really need another infantry officer for use with my WW1/VBCW army.

However as my WW1 figures often play the part of royalist regulars in VBCW games I thought I could use this officer for something linked to that but a little different. The fascist alternative government in VBCW is bound to have it's own security services. I imagine most of there time would be spent rooting out traitors and spying on the opposition. However my thinking was that if an attack was about to take place on a major hub of enemy action then the security services would be not far behind to hoover up intelligence and so forth recovered after the battle. Therefore occasionally the security services would need to don service dress and take to the field.

I didn't want to go with an overtly fascist black uniform and instead went for the above grey ensemble. My thinking on the paint job is as follows. More often than not members of security services are seen as "the grey man", meaning you could walk past them in the street and hardly notice them, or there quite bland and easily forgotten. Therefore I thought it would be ironic and reasonable justifiable for them to have grey battle dress.

Commonly red piping and hat markings are to symbolise staff or intelligence officers so I thought that the red would be a nice and justifiable contrast to the otherwise grey model. I really like how he turned out and I think will do rather nicely as "the man from the ministry" when in the field of course, the rest of the time this nefarious chap would be in a suit and bowler hat naturally.

I have another spare WW1 musketeer rifleman that I may have to paint up as his adjutant, in similar colours of course. All hail alternative wargaming periods that let me paint what ever the hell I want :)
Posted by Smillie at 08:40