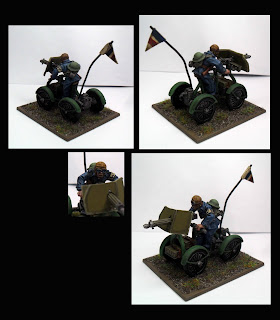 I spent yesterday evening painting up this little beauty sculpted by Paul Hicks, and purchased from his new venture "Mutton Chop". The model was great to put together, if a bit fiddly, but this was due to my cack handedness rather than anything else. Painting wise I went for a racing green frame. The driver is painted up in RAF uniform so that he fits in with my Wittering Defence Force. His armband (not fully visible in the pictures) reads "WDV" which stands for Wittering Defence Volunteers, the militia arm of my force.

I added the little flag and pole myself, for no other reason than I thought it would look good. The colours are the modern tactical flashes of the RAF, so not really period but I think it looks fine none the less.

I recommend this model to anyone who fancies painting up something a bit different. I should add the model does not come with a base, and strictly speaking does not need one. However as I will be gaming with this model I was a bit concerned that my cack handed gluing and sticking would not be strong enough and under the rigours of gaming the model might break, hence the base which is an old Victrix stand. 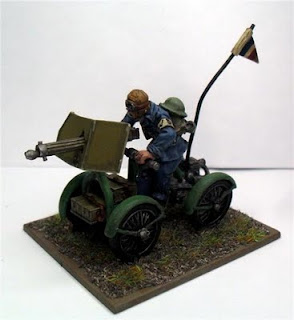