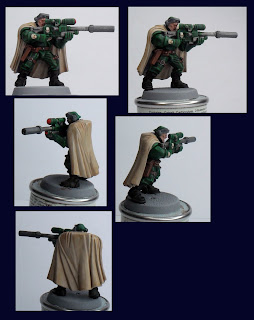 I decided to paint up something with some colour for a change. For years, despite my dislike of GW pricing, I have been collecting (of and on) an imperial guard army. I realised the other day that I never want to paint another las rifle ever again.

I have however always fancied a Dark Angles space marine army, one of the first models I ever painted was a Dark Angels standard bearer many many years ago. So I had a dig around in the cupboard and found a space marine scout I had built and never painted. I have no idea where the rest of the set are, or when I bought the model but hey I only needed one for a test model any way.

I really enjoyed painting up this model and think I might have a go at creating a little Dark Angels force, probably a slow burning project but something to do none the less.
Posted by Smillie at 09:46