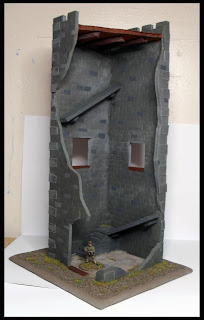 I started building this tower a while ago for something else and got bored after the construction phase and undercoating. Well the other day I didn't have much else to do and thought "you know what a gaming table always needs, a ruddy great tower from an indeterminate period".

So out came the built but not painted tower. I painted this up in simple greys (as that's pretty much what I had handy in any quantity) and picked out the odd brick in a different shade to add a bit of depth. I wanted the tower to be generally quite simple and open (hence the mashed side). I know a collapse on that scale should A. make the thing fall down and B. leave a big pile of rubble. But hey its still up and if I had left a massive pile of rubble it wouldn't have left much room for gaming. I think this could comfortable be used in any VBCW game, a more modern game or as a hideout for some cultists in a pulp game.

In the future I might make a big pile of rubble on a seperate base, or a similarly badly damaged hall to sit next to this, but for the moment I'm happy.

Model for scale is a Musketeer Lewis gunner.
Posted by Smillie at 13:14