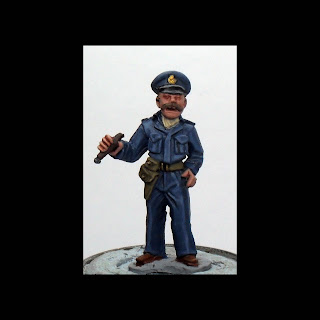 Received  a selection of Artizan miniatures today. Enough for an infantry squad and this officer chap. I've painted him before but as an Infantry officer for my VBCW force. As I have completed the force I need for the game in November I thought I would make a start on my own force which is based around RAF Wittering. Wittering was home of a training squadron until the mid 30's when it was converted into a fighter base.

In my alternative history the base having been cleared of the training squadrons and personnel is awaiting delivery of aircraft and new fighter squadrons when the civil war breaks out in 1938. The base commander who I have decided to name Wing Commander Burleigh (no relation) does not hold with the views of the BUF and Mosley so decides that Wittering will remain under his protection and not BUF control. Accordingly he has raised a small local defence force out of the skeleton base crew and local volunteers.

I'm going to flesh things out a bit at some point but for the moment the above model is Wing Commander Burleigh in battle dress, the plan is to paint up my other new squad in similar RAF colours. The rest of the force will be militia as the base is understaffed.
Posted by Smillie at 11:19