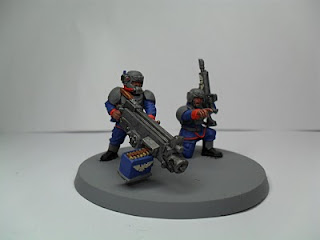 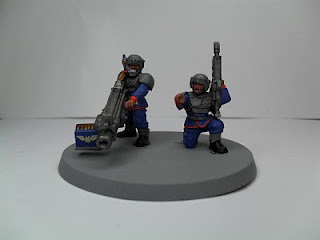 This is my Veteran Heavy Bolter Team.
I wanted them to look a bit different and as I had used the tripod from the Heavy Weapon kit on another model I produced a guy carrying the bolter, ready to fire from the hip. I basically cut the flamer of a cadian figure and fitted the bolter in its place. All in all I think it looks cool. The kneeling figure was made from parts from the Cadian Command Squad set.
Obviously I still need to finish the base with a bit of brown paint and scatter.
Posted by Smillie at 03:09