A return to familiar ground 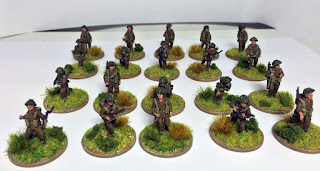 Well that took a lot longer than expected. I had intended to paint just four of these figures but I got carried away and ended up painting up 20. As you will have no doubt noticed these are WW2 late war British Infantry from the fantastic AB Miniatures range. The figures are 20mm but are as detailed as some 28mm figures I have painted. Truly lovely figures that make painting them a joy.

As they are that little bit smaller I found them a lot quicker to paint, and the slightly smaller scale allows for a simpler painting approach.

I've painted up two squads of 10 each, which was the paper strength in the late period. That said I expect to field these in 8 man sections should I ever get them on a wargames table as my reading leads me to believe that it was more likely that the squads would have been nearer the 8 man strength than the 10 man goal. Either way I prefer 8 man sections for some reason it just feels right.

The benefit of using 8 man sections being that this lot makes up an under strength platoon rather than just two squads. My intention is to paint up another half squad and a command section in short order to provide a full size platoon. 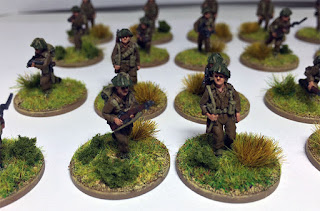 I think for anything other than very small skirmish games I will be switching to 20mm going forwards as I am able to achieve far more, to a standard I can accept, than I can in 28mm. That said I expect I will still collect 28mm figures for smaller games.