I'm in the process of moving house at the moment so not a huge amount is getting done painting and hobby wise. I did however manage to paint up these cold war brits from Elhiem miniatures. There 20mm which was a lot quicker to paint, and a touch cheaper. The sculpts are lovely and I already have another 4 on the table.

I can see a lot of 20mm in my future, the sheer amount of time I saved by painting these instead of 28mm makes it much more practicable hobbywise as time is tight. 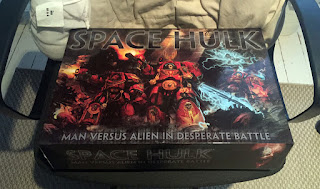 In other news I sold another part of my soul to Gamesworkshop. I noticed they had re-released the most recent edition of Space Hulk for another limited run (now sold out) and with she who must be obeyed's blessing grabbed myself a copy.

At £75 I would usually say this is typically steep for Gamesworkshop, but as my wife and I play board games and have bought a fair few over the years from other manufacturers for close to this price I'm thinking its not actually that outrageous.

Anyway I just couldn't resist, when this edition was first released there was no way I could afford it but this time round life is a bit rosier and its got a real nostalgic link for me as I played 2nd edition a lot when I was younger.
Posted by Smillie at 01:57