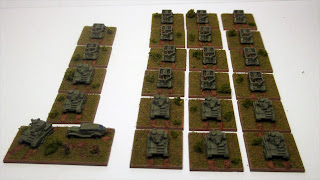 So I've made some more progress on my 6mm WW2 project. As I have run out of infantry figures (due to pick up some more after Christmas) I decided to model one of the Divisional support elements.

This is the 1st Lothian and Borders Yeomanry. They are currently missing a regimental HQ stand, but that will follow after Christmas when Santa will be bringing me more bases.

The 1st LBY were of course part of the 51st Highland Division and were lightly armed in 1939/40 with Carriers and Vickers Light Mk VIB  Tanks. They were broken down into A, B, C and HQ Squadrons with each Squadron sub divided into 6 troops. Troops 1 and 2 of each Squadron were equipped with Vickers Light Tanks whilst Troops 3, 4, 5 and 6 were all Carrier equipped.

The HQ Squadron was equipped with both light tanks and carriers in addition to lorries and motorcycles (the usual supply/maintenance kit which would follow a tank regiment around). I have not had much luck finding sufficient information about precisely what the HQ Squadron was equipped with so I have decided to model it with two Troops of Vickers, two Troops of Carriers and an HQ stand of Carrier and Staff car.

As I mentioned above I will also be creating the Regimental HQ stand after Christmas. 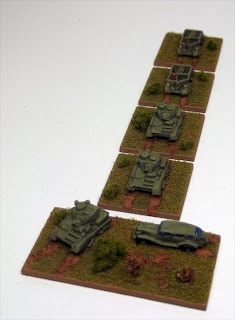 HQ Squadron (as I have decided to model it) 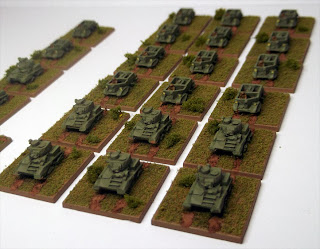 A, B and C Squadrons, I will have to do something to mark out the Squadron command stand in the future but it will do for now.


This group also represents the last of my "old" basing method and size. After Christmas I will be using slightly larger bases as I am finding the 20x20 bases a bit to fiddly handling wise. So once I have new bases and ordered some more infantry I should be able to press on and finish the final Infantry Battalion of one of the Divisions 3 Brigades. Before then pressing on and creating the other 6 Battalions which will make up the remaining 2 Brigades.

After that merry lot of Infantry stands is completed I will be able to get on with the fun stuff, Artillery, Machine Gun Battalions and other support elements. Of course as Santa will be bringing me 6mm Naps I might get distracted from my WW2 project.
Posted by Smillie at 09:55