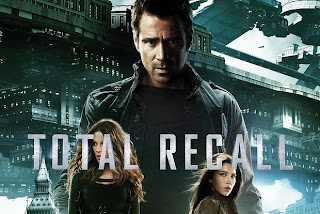 As you may work out from the title my wife and I went to see the new Total Recall film this afternoon. In a word it was wooden, and just made me want to watch the original Arnie version. The whole film seemed to have lifted the best (or most well known) bits from the original reworked them a bit, made them generally lamer (and waaaaay less gory) and chucked them in the film. Colin Farrell's performance is seriously wooden, although I think he's been crippled by a cack script. The only character/actor who works is Kate Beckinsale she seems to put in a real effort and her scenes are good. There's a fairly hocky reworking of the original plot, that in my opinion just doesn't work at all, and some pretty massive plot holes. The other stupid thing about this is there are tons of British actors/characters all talking with British accents but for some reason Bill Nighy's character speaks with a weird British/american accent for no apparent reason as america isn't in the film (ie doesn't exist any more)

Overall I give this a generous 2 out of 5 and don't recommend it, if you are thinking of going to see it I would recommend picking up the original and watching that instead. Ultimately all this film did was make me want to watch the original, oh and the 12a rating should tell you all you need to know as the original was an 18 and had some seriously gory old school scenes. I'll get off my soap box now.
Posted by Smillie at 14:22