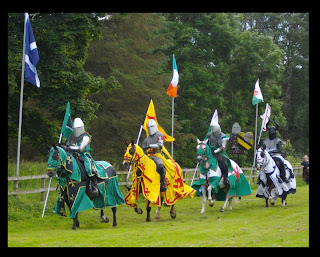 The wife and I had a great day out today, Castle Fraser near Inverurie, was having a medieval exhibition event, and as we had nothing else to do we thought we would pop along. The show was really very good, £10 each to get in (I believe there were concessions for the elderly and families) which wasn't to bad.

There was a great jousting display by a group called the Knights of the Dammed who are a professional stunt team, the four riders can be seen above in Irish, Scottish, Welsh and English colours (the black knight was English, on the far right). They put on a really good show with Jousting and single combat involving flaming maces! It was very enjoyable and funny. 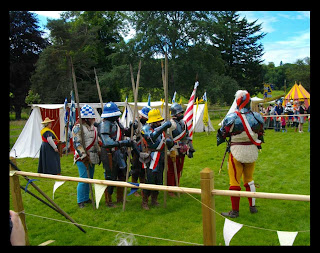 We then watched some a small Re-enactment group (who's name I didn't catch) displaying the fighting style of un-armoured Fraser Clan troops from the period. This was again very good, and quite funny. After a slightly expensive lunch from the burger van, and a coffee under a tree while we hid from a seriously heavy rain downpour, we watched a great falconry exhibition.

This was put on by Birds of Prey Displays, and was a very good demonstration, so good in fact I forgot to take pictures of the actual display, it was really good though. When we stopped by the chap who did the displays stand afterwards my wife snapped this picture of one of the birds (which is looking slightly hacked off at having been soaked by the rain!). 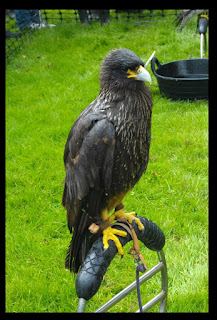 There were also some interesting displays of medieval weaponry etc, and an archery display, in addition to some small stalls and a bouncy castle for kids. Although most of the kids seemed to be too busy hitting each other with toy swords to get on the castle!

We really enjoyed this event, which I understand is running again tomorrow (22nd July 2012) from 1100 to 1600 at Fraser Castle, I recommend it as a fun day out for families.
Posted by Smillie at 13:40