The first Sculpt is the deepest 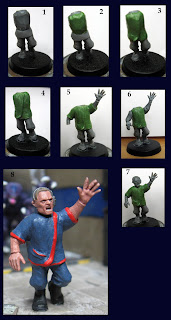 Little change this evening. I had painted up a modern miniature from Empress but to be honest I was really not happy with the results (my fault not the casting, which is top notch).

So whilst poking around in my pictures folder on the computer I found these pictures which I did not know I had of a gamesworkshop mini I sort of sculpted for use with a Diorama I was building at the time. The Diorama is of a genestealer breaking out of a holding tank and about to eat a couple of unfortunates. The Diorama itself is up on the public gallery on Dakka Dakka if anyone is interested just search within the gallery for Containment Breach, or Smillie and it should pop up.

Any way I thought I would post my feeble sculpting efforts and add quick "what I did". So from 1 to 8 above.

1. I took a Gamesworkshop Cadian Imperial Guardsman and cut of the pockets on the trousers (I thought they looked to combaty) and hacked the body armour off the front and back of the model as well. This took about 45 mins as I had to be careful and as the plastic was quite thick in places.

2. Next I added some greenstuff to the front of the chest to bulk it back out for molding into a sort of technicians top.

3. Added the front seam of the top and a pocket on the bottom left side of the models top.

4. More work on the front seam and rounding of the shoulders and back.

Sorry guys I've just noticed pictures 5 and 6 are the wrong way round .

6. I didn't sculpt the arms they were scavenged from an Empire pistol model as where the hands, I think. But the hands came from a different set so I had to cut them from the arms and glue them on the new arms.  I also had to severely cut down and scrape flat the shoulders to make the arms fit.

5. More green suff worked around the shoulders to make quarter sleeves for the top.

7. I did not really fancy having a crack at a head so I used the Srg's head from the Imperial Guard set. Although I cut the mic thing from his face so he just has the head phones.

Things to remember about the finished product. Firstly this was painted quite a while a go when I was still getting to grips with shading, highlighting etc when painting. So the paint job is a bit simple, that said I still like how the model turned out.

With hindsight I should have used greenstuff to make the arms flow into the hands, but at the time I thought it would be covered up by painting and I don't really want to fiddle with it now and I don't think it's hugely distracting.

Anyway hope you like my efforts, which are very much in the beginners league, picture of the whole Diorama below, which despite the basicish paint jobs still has pride of place on my miniatures shelf. 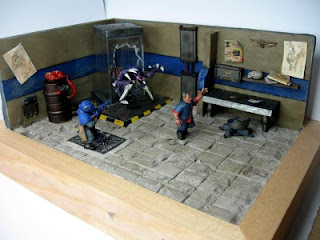